The State of Workplace Harassment 2021 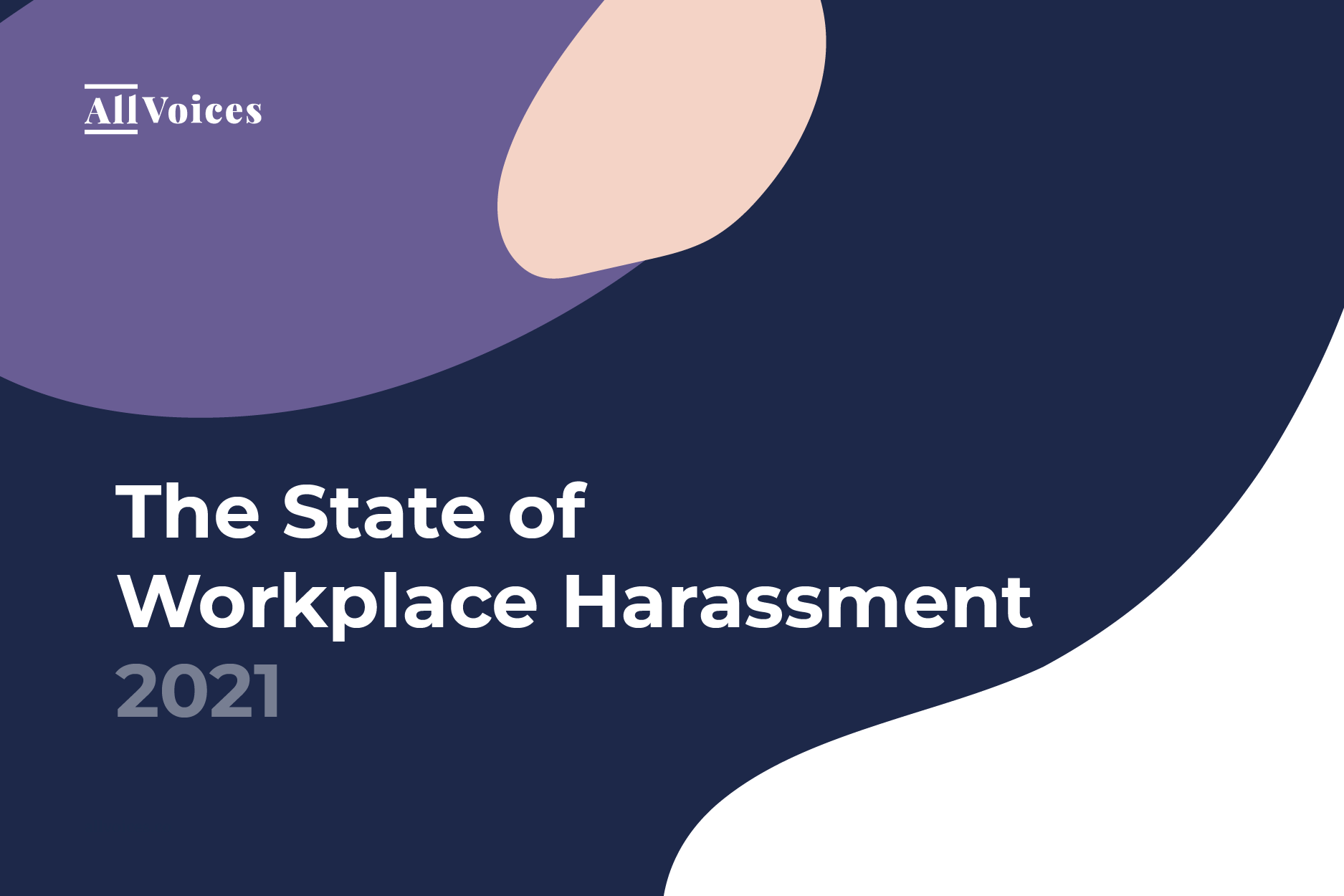 High-profile issues of harassment in workplaces seem to be hitting the news every week. But what about the issues of harassment that employees face every day, workers who pause with fear or anxiety before they step into their office or log onto their computer, concerned about what’s going to be said to them or about them, or what will be done to them?

From sexual harassment to discrimination to racism to power abuse, harassment plagues more than just a handful of employees: It’s pervasive, deteriorates culture and morale, and can lead to psychological discomfort, leaving a job, or lawsuits.

Why is this happening? And how can organizations work to prevent harassment before it begins, or hear about issues when they arise? The first thing to do is to hear from employees themselves, and their experiences, frustrations, and suggestions — and that’s what we did. We asked employees across all sectors and job levels to learn more about their experience with harassment, why many of them are reluctant to report, and what practical approaches workplaces can take to combat harassment today.

Methodology:
On July 13, 2021, we surveyed 822 Americans who are employed full time. The survey was conducted online via PollFish.com using organic sampling through Random Device Engagement (RDE). To access the raw data, click here. Learn more about the Pollfish methodology here.

Here are the top findings we found in our survey about workplace harassment:

53% say their workplace immediately addresses harassment. However, 12% see no action from their workplace, and 14.7% aren’t aware of any action taken. Additionally, only 54% of respondents have had their issues fully resolved.

34% have left a job because of unresolved harassment issues. 26% have remained at a workplace despite there being ongoing issues of harassment.

Only 50% have reported harassment. 18% said that even though they experienced or witnessed harassment, they did not report it. They didn’t report it for fear of retaliation, that nothing would be done about it, or that they wouldn’t be believed.

85% are more likely to report harassment if they have an anonymous channel. Additionally, respondents believe that they and their coworkers would be more encouraged to report with an anonymous reporting tool or platform.

Part 4: Reporting Harassment in the Workplace

The majority (20.6%) work in the IT/computer software sector, 10% work in healthcare, 8.5% work in educational services, and 8.4% work in financial services or insurance. The remainder fell throughout a variety of other sectors.

Workplaces should be environments where employees can feel comfortable to go to, feel safe and encouraged to share their ideas, and feel excited to do their best work. But unfortunately, harassment at work is a very real reality, and an employee’s productivity, comfort, and safety can be destroyed in a hostile work environment. We wanted to understand from our respondents what their experience is with harassment in the workplace.

44% have experienced harassment at work

In looking specifically at what kind of harassment our respondents experienced, we asked them to choose all that applied. The top answers were:

But this list of harassments wasn't the same for everyone. In looking further at our data, we found that female respondents had experienced sexual harassment (38.8%) and discriminatory harassment/bias (36.4%) more.

Respondents over the age of 45 experienced personal harassment/in-person bullying (48%) and discriminatory harassment/bias and psychological harassment/misuse of power (both at 38%) more.

48% have witnessed others experience harassment at work

48.4% report also having seen others experiencing harassment in the workplace. Similar to above, respondents tend to be senior-level employees who have been at their organization for five or more years. 51.6% have not witnessed harassment.

Harassment comes from both managers and coworkers

52% have not felt psychologically safe at work

We wanted to know if harassment would cease with remote work, or if it would unfortunately continue. 37.5% of respondents said that they had still experienced harassment through remote channels. 62.5% had not.

24% believe harassment continued or got worse with remote work

34% have left a job because of unresolved harassment issues

With nearly half of our respondents having experienced harassment, we wanted to know if they had taken action and left a position because of it? 34.1% of our respondents say that they have left a job in the past because issues of harassment were not addressed. However, 25.9% say they have stayed at a workplace despite issues of harassment not being addressed. 40% have remained in a workplace because there were no issues.

Harassment in its various forms is affecting nearly half of workers today, creating work environments that are uncomfortable to intolerable. Additionally, over half of employees have been in work environments where they have not felt psychologically safe, which impacts an employee’s ability to share ideas, bring up concerns, or contribute to their workplace culture.

Harassment doesn’t happen in a vacuum, but is caused by others — managers and coworkers who sexually and physically harass coworkers or employees, bully, discriminate again, abuse their power, and more. And, as we found, it’s not just limited to the four walls of an office or workplace, but has moved into the world of remote work as well.

While 34% have left a position due to ongoing unresolved issues of harassment, 26% have stayed in the environment despite the ongoing presence of harassment around them — which can crush productivity, morale, engagement, and even the desire to want to go to work each day.

In our next section, we’ll investigate what workplaces are doing to prevent harassment before it happens.

Harassment will thrive if ignored, and will deplete morale, create unsafe working conditions, and will lead to employees leaving, lawsuits, or egregious media attention. This is why workplaces must take an active approach to harassment, by not just normalizing the conversation around harassment, but by encouraging employees to report, and putting initiatives in place to actively prevent harassment before it starts. But are companies doing so?

77% believe their workplace puts in measures to prevent harassment

Those who said their workplace does not have measures in place to prevent harassment more often cite issues of abuse of power and microaggressions as their top experienced types of harassment from the list above.

Additionally, even though 76.9% report that their workplace puts in measures to prevent harassment, 43.8% have experienced harassment — which means that for 20.7% of respondents, harassment is taking place despite having measures in place to prevent it.

Those who responded that their workplace does not actively talk about harassment or put measures in place are more likely to have experienced sexual harassment and gender-based harassment from the list above. They’re also more likely to work in healthcare.

64% say their workplace makes resources about harassment available to them

Those who reported that their workplace does not provide resources, or aren’t sure if they do, are more likely to have experienced gender-based harassment and abuse of power from the list above.

For those who replied that no one is leading the conversation, respondents are more likely to come from IT/computer software, healthcare, and construction.

While it seems that many organizations are working to address harassment before it starts by actively talking about it in the workplace, and putting initiatives in place to raise awareness and encourage reporting, there’s still room for improvement in many of them.

In our next section, we’ll examine how employees go about reporting the harassment issues they see — and why they often don’t.

Part 4: Reporting Harassment in the Workplace
If issues of harassment can’t be prevented before they happen, they surely need to be addressed after they happen. But oftentimes they aren’t fully resolved, and oftentimes employees won’t report harassment for various reasons. We wanted to know more about reporting hesitations, how our respondents would feel more inclined to report, and if they even believe their workplace wants issues of harassment to be reported in the first place.

They don’t report because they fear retaliation, or that nothing would be done about it

What was the rationale behind why those who experienced or witnessed harassment didn’t report it? Here are the top reasons:

If we break the data down again, we see that different groups have different reasons for not reporting. For female and senior-level respondents, their primary reason for not reporting was that they feared retaliation for doing so. Male respondents didn’t report because they assumed someone else would report it, or they didn’t feel it was their place to report it. Entry-level employees didn’t report because they didn’t believe their workplace would take any action, or that they wouldn’t be believed.

55% report harassment to a manager

Yet respondents who reported their issue to a manager were more likely to see manager-to-employee harassment. This is concerning, as it means that employees may be reporting back to the harasser, or someone on the same level who may also be participating in harassment.

Additionally, unless the manager then reports the issue to HR, there may not be a record of the issue ever being reported, as the issue can easily fall by the wayside in a manager’s hands.

54% of harassment reports were fully resolved

If our respondents could report harassment in a completely anonymous way, would they be more inclined to do so? 84.5% replied that yes, they would. 15.5% said they would not.

Even with anonymous options, 24% still wouldn’t report the issue

72% believe their workplace wants them to report harassment

What are some actions that workplaces can take to encourage more reporting? We asked our respondents to choose all that applied:

What’s worse is that employees who were subjected to harassment now also feel like they can’t speak up for fear of retaliation — that they’ll be harassed for speaking up about being harassed — or that it’s a useless endeavor, since they believe their workplace won’t do anything about it (which seems to be the case, as only half of reported incidents are fully resolved). Or, they fear that their painful or embarrassing experiences won’t be believed.

What’s the solution? Employees are not only more inclined to report if the channel to do so is anonymous — 84.5% are more likely to do so — anonymous reporting is the number one approach they believe organizations can take to encourage more reporting. This is because anonymous reporting allows employees the ability to voice their concerns without fear of retaliation, not being considered a team player, or loss of job duties — something many employees can’t risk.

Ultimately, though, organizations should want to hear about issues of harassment in their work environment so they can fix it, so that the percentage of employees who believe their workplace wants them to report harassment should be 100%.

Harassment is pervasive, and damaging to morale, productivity, workplace culture, and employees’ futures. Yet not only is harassment allowed to go on, sometimes whole cultures are built around accepting it, or ignoring it when it happens. Workplace cultures can also be built around shaming those who report harassment, too, and forcing employees to either stay silent and work in hostile conditions, or go elsewhere.

There’s still a lot of work to be done, but one of the first steps is not just listening to — and believing — employees, but to value your organization’s health and wellbeing enough to want to hear about issues of harassment. Ideally, organizations will ramp up harassment prevention approaches so that when we ask “Have you experienced harassment?” in the future, our responses will be “No,” for everyone.